In Aaron’s case his hand-sewn Christmas stockings for British Army soldiers will be flown thousands of miles to those who have been deployed abroad over the festive period.

Inspired by the US trend to produce stockings for military personnel is on a mission to ignite the same passion here.

Having developed a joy for sewing during lockdown, the 17-year-old A-level student has put his new-found skill to good use by creating more than 30 stockings. They have been filled with an array of gifts from toiletries to sweets and were recently dropped off at Bulford Barracks in Salisbury to send out to British soldiers who will be in Estonia for Christmas. 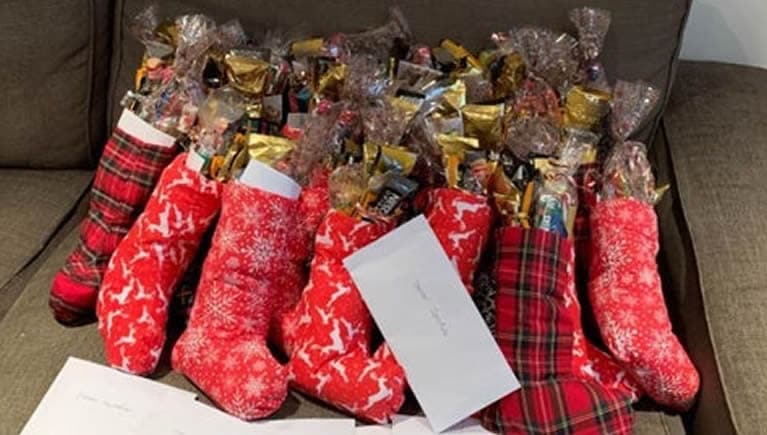 Aaron, who is a member of the Oxfordshire Army Cadet Force and plans to go to Sandhurst to become an officer for the British Army, told the Banbury Guardian: ‘’I’ve always had a respect for the Armed Forces and joining the Army is something I’ve always wanted to do.

‘’Several members of my family served in the Navy during the war so there is a connection and I’ve always had an interest in the military and I would like to follow in the footsteps of the older generation and do something productive.’’

With help from his mum, who kindly cut out the patterns for the stockings using material left over from making Covid-19 masks or had been donated, Aaron set about diligently sewing.

He filled them with items that were also donated.

Aaron said: ‘’I got the idea from the US charity Stockings for Soldiers. During lockdown I took up the hobby of sewing and found that I really enjoyed it and I like making alterations to Army kit.

‘’I also specifically wanted the stockings to go to troops who will be away for Christmas. I will be lucky to be at home with my family but I know the soldiers who will receive the stockings I have made will be in Estonia. It will be nice for them to have gifts to open and to know that other people are thinking of them and wishing them well.’’

Carly Berry, Head of Sixth Form at Wykham Park, said: ‘’Aaron’s decision to make the stockings and to think of others is truly touching and heart-warming. Hopefully others will be inspired by his kindness and selflessness this Christmas.’’

bANK HOLIDAY – MONDAY 19TH oCTOBER 2022 School will be closed on Monday 19th October due to this day now being a national bank holiday.…